My weekend is going to be spent sewing bibs. My sister and I are (hoping) to start an Esty shop together… We believe working together will keep us motivated and inspired. I think we’ll be a great team! She has a classic and cool design sensibility, and I like to make things quirky and funky, and I think we will balance each other out perfectly!

So this past week I worked on cutting out bibs. I didn’t pay attention to how many I was cutting, and when I got tired of it I realized I had 60 bibs!! I really have my work cut out for me! Here’s a sneak peek at what we will have available:

Our line will include several baby/child accessories. Right now we’re in the process of working out some of our designs and studying up on CPSIA regulations (ugh!), but hopefully we’ll be up and running in the next week or so!

In the meantime, don’t forget to check out the hats in my current shop! Today was a little cooler, so it won’t be long until hat weather!! I can’t wait to put Dex in his monster hats 🙂

So, the first week I moved to Chattanooga I found out I won a free yard of Kaffe Fasset Fabric from Sew, Mama, Sew! It was a very nice cheer-up 🙂

I have been planning a quilt of peach, purple, and red. I’m still not sure how this is going to look, or when I’ll get around to making it, but I’m fairly sure this fabric is going into that quilt.

Also, my wonderful nephews, Ty and Micah, celebrated their 1st birthdays a few weeks ago! I made them some monster hats. I love the way these turned out!

I’ve been planning to make monster hats for my Etsy shop FOREVER. But I kept putting it off. I finally got the motivation to do it, and I’m loving them! I have 5 listed in my shop so far, and almost 20 more started.

Shooting them was so hard, though. The older Dexter gets, the harder it is to photograph him. He was all over the place. Plus, even though he has been an active hat-wearer since birth, he felt it was an injustice to his soul to have to wear these hats for me. (Am I allowed to say, “I carried you for 9 months, the least you can do is let me exploit your cuteness to sell hats!!”?) 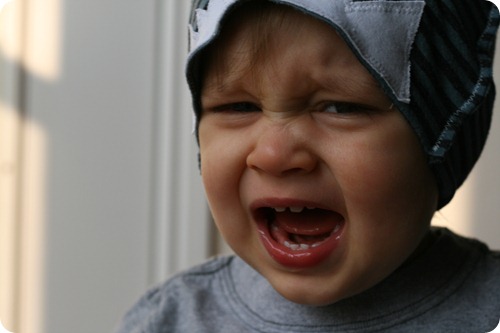 “Ok, I’ll be still, I just need to blow some kisses first!”

He spent most of his time running around on the far side of the room with my camera’s lens cap in his mouth.

I made the mistake of making him think we’d go outside, just to lure him closer to the natural light… drama ensued.

The best tips I can give are these:

1. Shoot when your baby is comfortable (not tired, not hungry, not wet, not too cold, not too hot…)

2. Distract, distract, distract! He chose the lens cap and my phone, and then I tried pulling out a mirror so he could check out his hats. But in the future I’m going to find some props that I won’t mind ending up in the pictures.

3. Do your best to get natural light so you can shoot without your flash. My pictures aren’t the best, but that really brings them up several notches. Just keep in mind that if there’s not enough light, your pictures will look blurry.

4. WORK FAST! If you have a digital camera, don’t get picky. Just focus and shoot as fast as you can, because those babies are quick. You may be able to use a quarter of the pictures you take 🙂 If you’re lucky :).

In the end though, if you can get just one drooly, lovable picture of your dude, it’ll be worth it 🙂 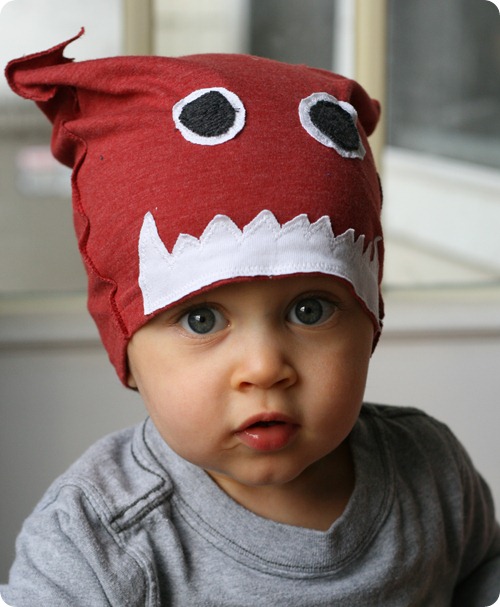